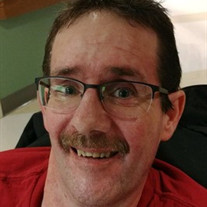 Travis Coons, 54, of Fayetteville passed away on Saturday, January 26, 2019 at the Chambersburg Hospital. For 35 years he fought a courageous fight with Multiple Sclerosis, battling everything the disease threw at him with a smile. He was born January 29, 1964 in Chambersburg, the son of Barry L. Coons and Donna Christina Wunderlich. Travis was a member of Coldsprings United Brethren Church. He was a 1981 graduate of CASHS and attended the Penn State Mt. Alto Forestry Program. He married his high school sweetheart, Barbara Bard on November 2, 1985. In addition to four wheeling, he loved the mountains, hunting and motorcross racing. Travis loved spending time with his family, especially the loves of his life, his sons and grandchildren. Surviving are: his wife, Barbara Coons; two sons: Zachary Coons (Fiancé, Erica Griffith) and their children: Marlie and Kali; Tucker Coons (wife, Megan) and their children: Madisyn, Eli and Hadleigh; a brother, Troy Coons (wife, Kerry); sister, Jacquelyn Schultz (husband, Bill) and several nephews. Preceding him in death were: his step father, Stephen Wunderlich; grandparents, Donald and Bernice Reasner, Harold and Alice Coons and Aunt Goldie Powell and Jody Reasner. The family would like to thank the Chambersburg Hospital CCU, Third Floor West Staff, Dr. Janicka and the Palliative Care Team, Megan Buisch, MPAS-PA-C from the Pulmonary Team and the nursing services that helped with the home care: Angels on Call, Penn Care, Myers Home Care. The funeral service will be held at 1p.m. on Friday, February 1, 2019 at the William F. Sellers Funeral Home. There will be a visitation from 6-8-p.m. on Thursday, January 31, 2019 at the funeral home. Burial will be in Mt. Pleasant Cemetery. Memorial donations may be made to: Multiple Sclerosis, https://www.nationalmssociety.org/Chapters/PAX. Online condolences may be expressed at sellersfuneralhome.com

Travis Coons, 54, of Fayetteville passed away on Saturday, January 26, 2019 at the Chambersburg Hospital. For 35 years he fought a courageous fight with Multiple Sclerosis, battling everything the disease threw at him with a smile. He was born... View Obituary & Service Information

The family of Travis Coons created this Life Tributes page to make it easy to share your memories.

Travis Coons, 54, of Fayetteville passed away on Saturday, January...

Send flowers to the Coons family.