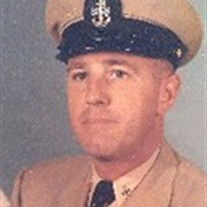 Troy E. Gruber Sr., 85, of Chambersburg died Feb. 5, 2013, after a battle with cancer. Born June 16, 1927, in Mount Joy, Pa., he was the son of the late Ida Jane Gruber. Later moving to Harrisburg, Pa, he graduated from William Penn H. S. in 1945. A veteran of the U.S. Navy, he served with distinction from May 1945 through April 1967 as a Naval Photographer, attaining the rank of Senior Chief Petty Officer. He was awarded Six Good Conduct Medals, Navy Expeditionary Medal (Cuban Operations), World War II Victory Medal, Navy Occupation Medal, Two National Defense Medals, and Korean Service Medal (2 Stars). His naval career took him to several countries on a range of assignments through his numerous duty stations, to include Atlantic Fleet Mobile Photographic Group, Naval School of Photography, U.S.S. Leyte and U.S.S. Palau. His wide-range of assignments encompassed event from the shores of Korea, entombment of General Douglas MacArthur to flying with the Navy’s aerial acrobatic team “Blue Angels”. After his retirement from the U.S. Navy he continued his photographic profession with the Federal Government, first with Weapons Systems Test Center at Patuxent River Naval Air Test Center Maryland, where through aerial photography he documented the use and actions of airborne weaponry. Several years later, he joined the Department of the Interior, Bureau of Indian Affairs where he photographed everyday reservation life of the American Indian in several Western States and Pacific Northwest including Alaska where he documented Kim Agnew, daughter of the late Vice-President Spiro Agnew, visit to remote Native Alaskan villages. The images he created were used to produce multimedia presentations utilized in Congressional Hearings and Public information, before returning to Patuxent River Naval Air Test Center Maryland where he retired from Federal Service. He was committed to community service with civic organizations such as the Boy Scouts of America; Fleet Reserve Association, Loyal Order of Moose, Benevolent and Protective Order of Elks, AMVETS and Veterans of Foreign Wars. He enjoyed camping, hiking, hunting and fishing. In addition to his mother Ida Jane Gruber, he was preceded in death by the mother of his children, Shirley Teresa Knox and his sister, Betty Farrell. He is survived by his present wife, Pamalee; his children, Clara Nichols and her husband, Alan; Troy E. Gruber Jr. and his wife, Jeanne; Margaret Redman and Harry Gruber; 13 grandchildren; and 5 great-grandchildren. The Funeral Service will be held from 5:00 to 6:00 p.m. on Thurs., Feb. 7, 2013 at the William F. Sellers Funeral Home, with the Rev. Dr. William H. Harter officiating. There will be a visitation held one hour prior at the Funeral Home. There will be a second service at 11:00 a.m. on Mon., Feb.11, 2013 at the Mattingly- Gardiner Funeral Home in Leonardtown, MD. There will be a visitation from 9:30 to 11:00 prior to the service there. Burial will be in Charles Memorial Gardens, Leonardtown, MD. In lieu of flowers, contributions may be made to Charlotte Hall Veterans Home (Veterans Assistance Fund). Mail checks to: Maryland Department of Veterans Affairs Charlotte Hall Veterans Home 29449 Charlotte Hall Road Charlotte Hall, MD 20622, please make checks payable to: Charlotte Hall Veterans Home. Online condolences may be expressed at www.sellersfuneralhome.com To send flowers to the family or plant a tree in memory of Troy E. Gruber Sr., please visit our Heartfelt Sympathies Store.

The family of Troy E. Gruber Sr. created this Life Tributes page to make it easy to share your memories.

Send flowers to the E. family.