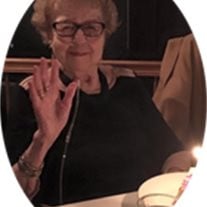 Violet K. (Vallie) Ryder, 97, of Chambersburg passed away on Friday, December 16, 2016. She was born on December 11, 1919 in Chambersburg, the daughter of the late Charles D. and Mary (Statler) Kriner. Vallie worked at the former Chambersburg Implement Company and in 1986, retired from Chambersburg OB/GYN Associates. She was a member of the Elks Club and Chambersburg Hospital auxiliary. As an active young girl, Vallie had an adventurous and competitive spirit, always preferring to be out of doors. She loved all animals but had a passion for horses and spent many hours riding all over back roads and fields. In 1940, she married Harold Grove Ryder and moved to the family farm on Warm Springs Road where she spent her days taking care of the grounds and tending to the various animals that lived there. In 1942, she and Harold welcomed their only child, Barbara Jane. In her later years, she enjoyed playing bingo in various venues around Franklin County. Mostly, Vallie loved her family and they her. On December 10, just six days before her passing, she celebrated her 97th birthday with her extended family at a local restaurant. She celebrated her actual birthday with her favorite coconut cake, ice cream and balloons. Surviving are her daughter, Barbara “Bobbi” (Mrs. Tom) Boock, five grandchildren: Lauri (Yourkavitch)Buckley, Tammy (Horn) (Mrs. Kip) Feldman, Kimberly (Yourkavitch) (Mrs. Eric) Clevenger, Brett (wife, Jennifer) Horn, Bradley (wife, Mary) Yourkavitch;eight great grandchildren: Alexandra Cantor, Ben and Andrew Feldman, Marissa, Kennedy and Amelia Horn. In addition to her parents, she was preceded in death by her older sister Vesta (Betty) Friese and her younger sister Helen Hoover. A funeral service will be held 11:00 a.m. on Thursday, December 22, 2016 at the William F. Sellers Funeral Home with Pastor Robert Macfarlane officiating. There will be a visitation one hour prior to the service. The burial will be private. Online condolences may be expressed at sellersfuneralhome.com To send flowers to the family or plant a tree in memory of Violet K. "Vallie" Ryder, please visit our Heartfelt Sympathies Store.

Violet K. (Vallie) Ryder, 97, of Chambersburg passed away on Friday, December 16, 2016. She was born on December 11, 1919 in Chambersburg, the daughter of the late Charles D. and Mary (Statler) Kriner. Vallie worked at the former Chambersburg... View Obituary & Service Information

The family of Violet K. "Vallie" Ryder created this Life Tributes page to make it easy to share your memories.