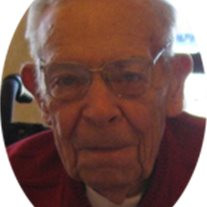 Welty M. Shaffer, 94, of Chambersburg, PA, died on Tuesday, December 30, 2014 at Cumberland Crossings Senior Living Community, Carlisle, PA. Born November 11, 1920 in Franklin County, he was the son of the late Max and Hazel (Hartman) Shaffer. He was married to his wife, Iona (Wilhide) Shaffer, for 62 years prior to her decease on January 6, 2003. He and his wife were members of King Street United Brethren Church. Mr. Shaffer had his own construction company and build many homes in the Chambersburg area during his long career. He served his country in World War II, first in the Philippines and then in Japan. He remained in Japan after the war to build military communities for American soldiers and their families. Mr. Shaffer loved hunting, fishing, tending his roses, making wooden gifts, and ice cream. He was a member of the Kiwanis Club and the PA Home Builders Associations, where he served as president. He is survived by six daughters, Virginia Guyer and husband Robert of Chambersburg, Bonnie Korhonen and husband David of California, Judy Miller and husband William of Lancaster, Jan Springer and husband Larry of Carlisle, Brenda McKenrick and husband Randy of Fayetteville, Jill Henry and husband Barry of Chambersburg; one son-in-law Gary Misavage of North Carolina, 19 grandchildren, 26 great grandchildren, 1 great, great grandchild, one brother Glenn Shaffer and one sister Shirley Shaffer, both of Chambersburg. In addition to his wife and parents, he was preceded in death by his daughter, Barbara Misavage of North Carolina, his grandson, Jamie Henry, his sisters, Betty Osler and Edna Armstrong, and his brother, Paul Shaffer, all of Chambersburg. A private funeral will be held at the convenience of the family. Interment will be at Parklawn Memorial Gardens with military honors. Memorial contributions may be made in Mr. Shaffer's name to: Homeland Hospice, 2300 Vartan Way, Suite 115, Harrisburg, PA 17110. Online condolences may be expressed at www.sellersfuneral home.com. To send flowers to the family or plant a tree in memory of Welty Shaffer, please visit our Heartfelt Sympathies Store.

The family of Welty Shaffer created this Life Tributes page to make it easy to share your memories.

Send flowers to the Shaffer family.