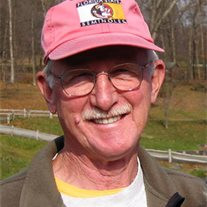 William L (“Bill”) Casteel, 91, formerly of Terra Alta, WV and Somerset, PA left his mortal body on Dec. 21, 2018, at Penn Hall Nursing center in Chambersburg, PA. The winter solstice, a full moon, a Christmas comet, and the Perseid meteor shower all heralded his passing and would have pleased him immensely. A naval veteran of World War II, he served in the Pacific Theater and survived a ship sinking at Buckner Bay, Okinawa during Typhoon Louise in October, 1945. He was one of the first Americans to visit Nagasaki after the war and appreciated the importance of our precious alliances to help preserve world peace. Bill retired from Penelec in 1989. He was a highly creative individual with boundless curiosity, an engaging personality, and myriad achievements. He was well known among local artists, ham radio operators, history buffs, gun makers and marksmen. Some will remember his letters to the editor of the Somerset Daily American, which were frequent, forthright, and fiercely independent. Bill was at home in the woods or at the beach and was a natural musician with excellent pitch and a beautiful tenor voice. He enjoyed vast genres of music and taught himself to play many instruments. He also produced a remarkable collection of oil and acrylic paintings and a trove of distinctive watercolors. Bill was preceded in death by Eleanor Luthera (“Lou”) Casteel, his wife of 66 years. He is survived by a son, William Benson (“Ben”) Casteel of Tallahassee, FL and two daughters: Kay Casteel (m. Neil Coleman) of Mercersburg, PA and Carol Capps (m. William Capps) of Pittsburgh, PA. His grandchildren (Ashley Capps & James Capps, both of Pittsburgh; and Fiona Coleman of North Wales, PA) will remember him as a fount of information, a source of inspiration, a teller of many (often humorous) stories, and a man who loved them all dearly. A memorial service is planned for 2:30pm, January 5th, 2019, at Penn Hall Chapel (now called Chambers Pointe) in Chambersburg, PA. As a Navy veteran, Bill requested that his ashes and those of his wife be buried at sea during a military service.

The family of William Lee Casteel created this Life Tributes page to make it easy to share your memories.

Send flowers to the Casteel family.