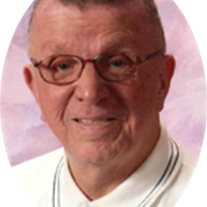 William P. Clowes, 82, passed away on Thursday, July 31, 2014. He was born Aug. 23, 1931 in Cedar Falls, Iowa, the son of the late Harry Goodwin Clowes and Ethel Pearl (Pierce) Clowes. He was a member of the Hyattsville Presbyterian Church. Later he attended the Presbyterian Church of Falling Spring where he served as Deacon and Trustee. William was a graduate of McKinley Tech in Washington, D.C, where he received the Circle T award in sports. He was a production manager for Broadcasting Trade Association where he retired in1992. He enjoyed baseball and football. His favorite teams were the Redskins and Washington Nationals. In addition, he enjoyed model railroading and was a member of the model railroad club in Quincy/ Hanover. Surviving are two daughters: Jane (Clowes) Ivey, Karen Clowes; a brother, Roger Clowes; a sister in law, Eva Albright Chaney; three grandchildren: Patrick Jr., Kyle and Dylan Ivey; three great granddaughters: Shelby, Leah and Skylinn; two nieces: Patricia Hillmuth and Gala Harmon; six nephews: William C. Hillmuth III, James H. Clowes, Thomas G. Clowes, Mike Gilliam, Steve Albright, Roger Albright, and nine others in Tennessee. In addition to his parents, he was preceded in death by his wife, Rita B. (Albright) Clowes. Funeral services by the William F. Sellers Funeral Home will be held on Thursday, August 7, 2014 at 11 a.m. in Fort Lincoln Cemetery Little Church with the Rev. Harry Winsheimer officiating. Visitation will be one hour prior to the service. Burial will be in Fort Lincoln Cemetery. In lieu of flowers, memorial contributions may be made in memory of William to: Presbyterian Church of Falling Spring, 221 N Main St., Chambersburg, PA 17201. Online condolences may be expressed at www. sellersfuneralhome. com To send flowers to the family or plant a tree in memory of William Pierce Clowes, please visit our Heartfelt Sympathies Store.

William P. Clowes, 82, passed away on Thursday, July 31, 2014. He was born Aug. 23, 1931 in Cedar Falls, Iowa, the son of the late Harry Goodwin Clowes and Ethel Pearl (Pierce) Clowes. He was a member of the Hyattsville Presbyterian Church.... View Obituary & Service Information

The family of William Pierce Clowes created this Life Tributes page to make it easy to share your memories.

Send flowers to the Clowes family.