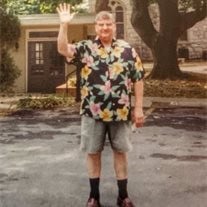 The Reverend Dr. William Hall Harter, 83, was called to his eternal resting place on Saturday, August 29, 2020. The son of the late Eugene and Doris Hall Harter, he was born September 11, 1936 in Titusville, Pennsylvania. He was a beloved brother,... View Obituary & Service Information

The family of William H. Harter created this Life Tributes page to make it easy to share your memories.

The Reverend Dr. William Hall Harter, 83, was called to his eternal...

Send flowers to the Harter family.