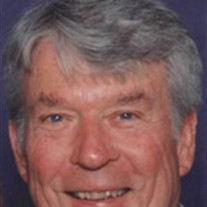 William Glynn Hutchings, 79, passed into eternity on Mon., Sept. 5, 2016 at the Hershey Medical Center. He was born on Dec. 9, 1936 in Lawrence, KS to William Ross and Ellen Glynn Hutchings. He was a graduate of Bettendorf High School in 1955. After high school he attended the University of Dubuque until he was drafted in the United States Army where he served as a Broadcast Specialist (DJ) in Puerto Rico. He received a Bachelors Degree from the University of Maryland and a Masters in Public Administration from Indiana University. He had a 30 year career as a civilian with the Dept. of the Army which began at the Rock Island Arsenal. His career led him to Fort Ben Harrison, Indianapolis, Camp McCoy, Sparta, Wisconsin, Heidelberg and Stuttgart, Germany, and Charlottesville, VA. In 1979 he came to letterkenny as the Deputy Chief of Staff and completed his career as Deputy Chief of Staff for Personnel with the United States Army Depot System Command (DESCOM). He taught management courses at Piedmont Community College in Charlottesville, VA and Wilson College. William is survived by Wanda, his wife of 53 years, his three brothers, Timothy (Connie) Kewanee, ILL, Matthew, Waterloo, IA, and Taylor, Owasso, OK, three sons, Brent (Kerry) State College, Brian(Kate), Longwood Florida, and Chad (Kim), Ashburn, VA. He is also survived with seven precious grandchildren, Morgan, Madison, Kelsey, Kaige, Reed, Joseph and James. He was a member of the Presbyterian Church of Falling Spring (PCFS), where he served as an Elder and Trustee. He was a previous member of the Chambersburg Country Club. Bill and Wanda enjoyed sharing the beauty of WV with family and friends at their log cabin at Alpine Lake Resort, Terra Alta, WVA. In Chambersburg, he served on the boards of the Transit Authority and Cumberland Valley Animal Shelter. His hobbies and interests were many, varied and included: saltwater tropical fish, gardening, gourmet cooking, golf, travel, reading and playing bridge (Chambersburg Duplicate Bridge Club). Bill had a love for football ever since he played in high school and college with a scholarship. He later played semi pro for the Quad City Raiders in Davenport, IA. Funeral services will be held at the PCFS on September 16, 2016 at 11 a.m. with the Rev. A. Hart and Rev. W. Harter. Memorial gifts may be given to PCFS or the Cumberland Animal Shelter. To send flowers to the family or plant a tree in memory of William Glynn Hutchings, please visit our Heartfelt Sympathies Store.

William Glynn Hutchings, 79, passed into eternity on Mon., Sept. 5, 2016 at the Hershey Medical Center. He was born on Dec. 9, 1936 in Lawrence, KS to William Ross and Ellen Glynn Hutchings. He was a graduate of Bettendorf High School in 1955.... View Obituary & Service Information

The family of William Glynn Hutchings created this Life Tributes page to make it easy to share your memories.

Send flowers to the Hutchings family.