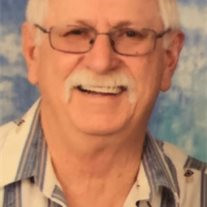 William Edgar Kuhn (Coondog),75 of Chambersburg, passed away December 24, 2019. He was born December 9, 1944, the son of the late Edgar A. and E. Jane Kuhn (Beattie). A 1963 graduate of Chambersburg Area High School, he was a member of the Lifepoint Church in Chambersburg where he was a Deacon Emeritus. He served in the U.S. Navy from 1963 - 1967, a Vietnam veteran. Bill worked for the former James River Corp for 32 1/2 years, retiring as Production Coordinator/Scheduler. He also worked as Traffic Manager at PSI in Williamsport, Md., delivery driver at Lowes, various jobs at Kohls and delivery driver for Park Avenue Pharmacy. Bill was a Life member and Past Commander of the Burt J. Asper American Legion Post 46, a member of George Washington Masonic Lodge 143, and the Elks lodge 600. Bill loved to golf, bowl, fish, watch NASCAR , Steelers, Penguins, and Pirates. Bill and his wife loved to travel on their motorcycle. He also loved the beach. Surviving are his wife of 43 years, Orlena M. (Hummer) Kuhn who he married on August 20, 1976 in Hagerstown, MD; his daughters: Christina D. Redano (Mike) of Waynesboro, Kristina M. Speer of Chambersburg; a brother Richard E. Kuhn (Linda) of Scotland, a brother-in-law, Marvin Hummer of Chambersburg; six grandchildren: Christopher Foschia, Ashley Gorman, Matthew Foschia, Amanda Mattone, Jeffrey Ewan and Kendall Keepler; seven great-grandchildren; a nephew, Daryll Kuhn and two nieces: Veronica Aliferis and Rebekah Shaw. In addition to his parents, he was preceded in death by a daughter, Karen D. (Speer) Fedele and an infant son. The funeral service will be held at 12:00pm on Tuesday, December 31, 2019 at the LifePoint Church with Pastor Randy Rhodes and Pastor John Cook officiating. Prior to the service at the church, there will be a viewing from 10:00 a.m. to 11:35 a.m. with Masonic Rites at 11:40 a.m. Burial will be in Parklawns Memorial Gardens with military honors provided by the Charles Nitterhouse post #1599 V.F.W. Honor Guard. Memorial donations may be made to: Life Point Church (remodeling) 339 Lincoln Way East Chambersburg, PA. 17201 or Cumberland Valley Animal shelter 5051 Letterkenny Road West Chambersburg, P a. 17201

William Edgar Kuhn (Coondog),75 of Chambersburg, passed away December 24, 2019. He was born December 9, 1944, the son of the late Edgar A. and E. Jane Kuhn (Beattie). A 1963 graduate of Chambersburg Area High School, he was a member of the Lifepoint... View Obituary & Service Information

The family of William E. Kuhn created this Life Tributes page to make it easy to share your memories.

Send flowers to the Kuhn family.